Find what you're looking for

photo by Carolyn Lehrke on flickr.com

A bird circles overhead, searching.  She swoops down to pick up a ribbon from discarded gift wrap picked up by the wind on garbage day.  Back at her nest she skillfully weaves it into a perfect example of found and functional art.  Brush pile twigs, twist ties, yarn from pulled sweaters, and dryer lint are the stuff of the dwelling that will house her children.

“The stone the builder rejected has become the cornerstone.”

Today’s first reading from the Acts of the Apostles tells us something about what it means to build a nest, to build a dwelling for our souls.  It’s a process that can look very different from the building projects of city planners that rely on logic and tested and trusted materials.  Nesting is about redefining family, softening our boundaries.  It can be a project that reclaims things lost or rejected. Songs, stories, and experiences that have grown dusty become essential again.  Nesting can pull up strands of memories and feelings (good and bad) put by the curb long ago.

“The stone the builder rejected has become the cornerstone,” proclaims Peter, quoting Psalm 118.  At face value is seems like an attack, “Religious leaders, you had Jesus killed!  You rejected him and yet he still has power!”  But the cornerstone, rejected and reclaimed, is more than a verbal attack, it’s a personal statement of faith. “The stone the builder rejected has become the cornerstone.”  Peter would know: Peter, the disciple who pledged his allegiance and then rejected Jesus in his hour of need.  “I do not know that man!” he shouts in the courtyard of the high priest’s house as Jesus is interrogated inside.  Today we read he has cured a crippled man and, questioned before the Sandeherin, he is filled with the Holy Spirit and boldly names the source of his courage and power. Peter’s story bears witness to the rebuilding of a soul and the rebuilding of a community from material once rejected.

“The stone the builder rejected has become the cornerstone.”

Maybe this will feel familiar to you.  Peter is a fisherman doing what’s expected, living the life within the approving circles of society.  He becomes a disciple of Jesus and in this community he discovers hidden gifts.  He learns he can be bold; he learns that he can teach; he finds he can heal.  In Galilee, among fishermen, farmers, shepherds, his voice never wavers.  But in Jerusalem, among the religious elite, the scholars and priests, in an environment hostile to Jesus and his message – Peter hides behind the guise of an innocent bystander, rejecting the insight and empowerment that made him Peter, “the rock,” back in Galilee.  He not only rejects knowing Christ but rejects the Christ that is in him (all of the boldness, the power, the authority he discovered) – because of fear, because of pressure, because of the social awkwardness.

We too reject pieces of ourselves for being impractical, shameful, mundane, or embarrassing.  We function out of assumptions we’ve picked up about what it means to be a man, a woman, to be family, to be a Christian, to be a responsible citizen.  But then we have experiences that reveal more of our wholeness: an experience of love and sexual awakening, a new idea that contradicts what we’ve known, an encounter with God that seems crazy, unexplainable, an encounter with a group or a friend where we don’t need to hide our quirks.  But for one reason or another we closet ourselves again, we reject these truths for the sake of building a life that makes sense, that’s practical.   But today we are challenged to look at the rejected pieces of our identities as the cornerstone of anything worthwhile we’re going to build.

Peter had to decide to reclaim Christ even though it would make him look foolish or silly, or even put him at social and physical risk.  Peter had to come to terms with the truth he knew in the absurdity of a dying God.  He had to trust the power that no earthly authority had given him.  He had to be okay with being perceived as ordinary and uneducated by the high priests and boldly speak his truth.  This project of reclaiming what was rejected took time, like a bird slowly gathering found pieces.   A lot happened between Jesus’ death and the moment we read about today – including many experiences with the risen Christ.  Peter slowly reclaims and rebuilds his soul and thus reclaims Christ.

And our building is never complete!  There will always be new experiences to integrate, new lives to embrace as we move closer to imaging the Body of Christ.  We build our spiritual nest, not out of hard stone, but lives made soft with true living. 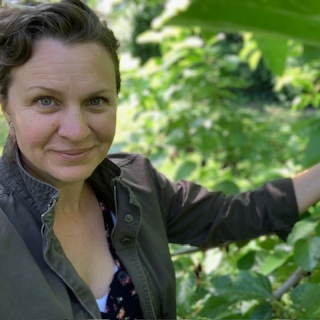 It's not about what I do, but I do... change diapers, play in the dirt, feed my family, ignore dust bunnies (that's a do!), marry couples, baptize babies, breastfeed in public, and reflect on life. My ordinary experiences of motherhood, divorce, remarriage, fear, and ecstasy inform my priesthood. I serve in the Ecumenical Catholic Communion, but I am a priest at the altar of my own life.

Find what you're looking for...